One evening in 1922, two airmen, Lieutenant Harold R. Harris and Lieutenant Frank B. Tyndal met Leslie Irvin at McCook Field (near the site of Wright-Patterson AFB) to have drinks and share stories about lives saved by parachutes. One of the airmen said “We ought to start a club for guys like us. As time goes by more and more fliers all over the world will owe their lives to your chutes, it should be quite a thing in years to come.”  And that was how the Caterpillar Club, an exclusive club for those who had their lives saved by a parachute, was formed.

By 1939, membership of the Caterpillar Club had risen to 4,000 and included fliers from China to Peru and nearly 50 countries in between.  By August 2014, It is estimated that at least 100,000 persons have saved their lives with a parachute.

The only requirement to join is to have saved one’s life by an Irvin (IrvinGQ) parachute from a stricken aircraft and either civilian or military personnel may apply. Persons that intentionally jump from an aircraft, for example skydivers or test parachutists are not accepted.  Potential members are required to apply to the company with evidence of their descent and these are checked and independently corroborated, to avoid the Walter Mittys and ‘badge collectors’ who try and join. We will use newspaper and accident reports and on occasion the kind facilities of the RAF Hendon Museum archives to check the veracity of any claim.

There is no initial cost to become a Caterpillar Club member. In return of a successful application, the member will receive an engraved golden caterpillar ‘pin badge’ with the recipient’s name that may be worn on one’s collar, together with a membership card and certificate with an individual membership number. These items can be replaced, albeit at cost and are only provided to the original applicant or direct family members. Unfortunately they are not for purchase by friends, colleagues or collectors. 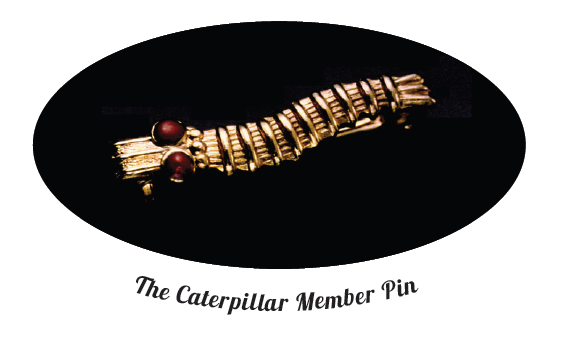 The latest members of the Club include our youngest member a teenage son and his father who escaped from a glider in Scotland which was involved in a mid-air collision.  We had the pleasure of inviting this family down to our factory so that they could be involved in our recent visit by HRH Prince Charles, a photograph of the father and son being presented with a certificate by HRH was featured in the Daily Mail albeit they have the caption wrong. (http://www.dailymail.co.uk/femail/article-3465810/Prince-Charles-given-picture-parachuting-royal-visit-Wales.html).